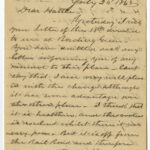 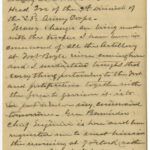 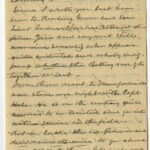 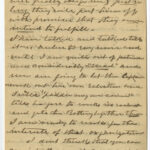 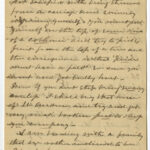 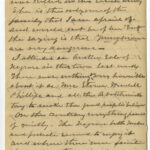 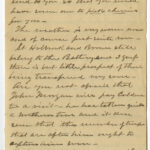 Glasgow KY July 24” 1863 Dear Hattie Yesterday I recd your letter of the 18th directed to me at Bowling Green. You have doubtless recd my letter informing you of my removal to this place. Cant say that I am very well pleas ed with the change although it has some advantages over the other place. I think that it is healthier and the quaters is excelent whilst there it was very poor. But it is off from the Rail Road and therefore seems as though it were out of the world. It is thought to be a place of much importance in a military point of view. it brin us our of the main thoroughfares between Louisville and the Tennessee country and also the buss and Head Qrs of the 9th Division of the 23rd Army Corps. Many changes are being made with the troops. I have been in command of all the Artillery at Fort Bugle [  ?  ] cuningham and I understand tonight that every thing pertaining to the Fort and fortifications together with the force to garrison it is to be part under my command tomorrow. Gen Burnsider Chief Engineer is here and has requested me to meet him in he morning at 7 o’clock (rather an early hour by the by for me to be up) and I [  ?  ] it is for the purpose of putting me in command I had rather go into the field but so long as I am kept here am ready to do that which will be of the greatest benefit to m[  ?  ] Samuel. Since I wrote you last have been to Bowling Green and saw Lieut. Andrews (he has still got the force [  ?  ] and any neck still [            ?            ]) who appears quite contented and wholly indif- ferent whether the battery ever gets together or not. From there went to Munfordsviles and staid over night with Capt Hale. He Is on the contrary quite anxious to be united and go into active service in the field. But he lacks the confidence and [  ?  ] to go ahead and talk to those Generals and red tape officials and tell them just what he wants and what he is bound too leave. That is what is needed and so [  ?  ] as he goes to them and says (please do so and so and you will greatly oblige me) just so [  ?  ] they will put him off with promises that they never intend to fulfill. I have talked and talked till it is useless to say [  ?  ] until I am quite out of [  ?  ] and considerably “Mad” and now am going to let the Captain work out his own salvation and I will “paddle my own canne” till he goes to work no earnings and gets the Battery together then I am ready to work for the interests of that organizations I don’t think that you can consistently preach to me of being so careless and regardless of [  ?  ] when you are according to your own accounts persistently trying to break your own neck not satisfied with being thrown from a carriage and seriously injuring yourself. You must put yourself on the top of some kind of a cobhouse and try to pick fruit from the top of a tree and the c[  ?  ] is that “pride must have a fall” so down you vent and got badly hurt. Now it you dont stop being so very useless I shall buy that horse of Lt. Andrews and try and get my neck broken first to keep in company. I am boarding with a family that are rather inclined to be [  ?  ] but we get along very quietly as the subject is seldom [  ?  ]. They belong to the Aristocracy of Kentucky. Own a large number of slaves. besides two daughters one of whom is a young widow; her husband was killed in the [  ?  ] Army She is the only one of the family that I am afaid of and would not be  of her but the saying is that Young widows are very dangerous. I attended an austion sale of negrars in this town last week there was nothing so very horrible about it as Mrs. Stowe M[  ?  ] Phillips and al the abolitionists try to make the good people believe on the contrary everything [  ?  ] of quietly. The negroes butts males and female seemed to [  ?  ] it and where there were familiar to be sold thru purchasing would buy them all that so the man that first bought one would always but the ballmen of the family. I had a notion to buy a bright little boy that I saw sold for 200 dollars and send to you so that you would have some one to pick cherries for you. The weather is very warm now and of course just suits me. Lt. Holbrook and Brown still belong to the battery and I guess there is but little prospect of their being transferred very soon. Are you not afraid that when Morgan will pay Cold[  ?  ] tis a visit. He has taken quite a northern tour and it does seem that this number of troops that are after him ought to capture him soon. Hoping that if he does come that he will not [  ?  ] you off I will bid you good night, sending love of                                 Byron