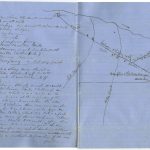 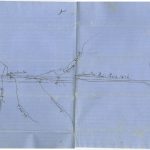 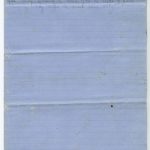 A. Edmund Runes taken the oath was secesh B [ ? ] C Casseys was secesh (has had some cotton burned) D Widdow Rodgers E Unknown F. Church G Simpsons ferry H Jones & Woosters Mill I Davis was secesh has taken oath J Mills (Either side) K. Youngs Union L Derry berry “ but very quiet There is a strong Union Element in Middleton Pocohontas. If protected or armed it would show itself actively. Middleton is strongly secesh Dr S H White Allen McKinsie Parks & Lilliard are the leaders. White was a major in the 12 months service at the expiration of the term he returned home. When the 6 Div marched to Bolivar three men were made prisoners by him (so our guide says. He heard Allen talking about it). & it is a fact that three men of the 15 Mich were taken prisoners & sent to Memphis & from there sent to Cairo to be exchanged. The two men spoken of in my report Jenkins & Sheron who had their cotton burned are both secesh Sheron is a methodist pracher of the [ ? ] JM. Oliver [Hand Drawn Map] Having been away from home for a long time and being desirous of seeing my wife I would feel very grateful were you to issue a pass allowing my wife to visit this city