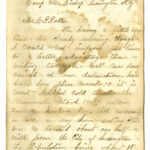 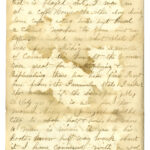 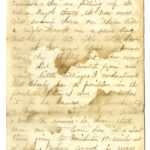 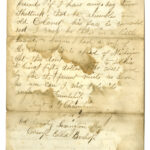 Head Quarters 11th Michigan Cavalry Camp Ella Bishop Lexington Ky Mr. E P Potter Sir having a little spare time this sunday evening. though I would not improve the time to a better advantage then – writing to you. Well wee have arrived at our destination. have been here three weeaks & it is most dredful cold weather the thremometer stood 18 bellow zero on New Years day, that as nearly as cold as my own native state wee ar located about one half mile from the City of Lexington the Population being about 15 thousand & has been a buisness place. but was & rumors of war has done the most of buisness men away. that notorious Gurrilla chief John Morgan, carrid on an extensive factory before the war that is played out. I was in at a coffe house the other day drinking some coffee & eating some soft bread a collard women to pour out my coffee. she asked me what state I was from Michigan as a matter of course. she thought the women were great for multiplying & – Replenishing thare has been fine Regt here from, the [     ?     ] state. I asked the woman if she knew, Johney, Me, Oh ([  ?  ] yes & he is [  ?  ] for this women. Bulley for (John), [  ?  ] the city is above half & half, but whare a man is union it goes to his Boots, know half way work about it I have conversed with good many. thay say they think the institution of Slavery is right but save the union & let Slavery goe to the Devel if is nessary. I think this Rebellion is about played out about next June old, Jeffs kingdom will – crumble. they are filling up the [   ?   ] Regt. they & the new ones will swoop down on them like a night Hawk on a june bug well dry up this idle talk now are all the royal bloods of Homer here they [   ?   ] yet. how many men did they snatch from our quiet little villiage. I understand that Charley has a position in the fourtenth battery. I am glad to here it he has earned his shoulder strap & they are a nice body of men well the rumor is now that wee are to leav here in a short time going to Winchester 18 miles east of here. Whare wood is more plenty. it casts twelve 12 dollars a card here small price, well taps have blown & I must draw this to a close should like to have you write as often as posoble Give my respects to all my friends if I have any, say [   ?   ] Shattuck. that he resembles our old Colonel his face is somewhat red I guess he takes in a little Brandy & Sugar. I had a sip of Ky corn, & it is ahead of Michigan but they don’t sell any to soldiers it being fifty dollars [  ?  ] well good by for the present write as soon as you can I will subscribe myself, in friendship, Sergt E. G. Champion Co H 11th Michigan Vol Cavalry Lexington Ky Camp Ella Bishop