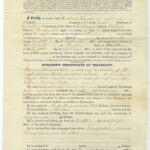 CERTIFICATE TO BE GIVEN TO VOLUNTEERS AT THE TIME OF THIER DISCHARGE TO ENABLE THEM TO RECEIVE THEIR PAY, &c. Note.-Two of these certificates (or duplicates) are to be given to each volunteer soldier who may be discharged previously to the discharge of his company, that he may at once receive from the Paymaster the pay, &c., due him, and the Captain or other officer commanding the company, will certify to the act of the delivery of the duplicate certificates; on these certificates the soldier is “entitled to” his DISCHARGE, and should also present his discharge to the Paymaster to have the payment endorsed on it. The discharge is to be given back to the soldier, by the Paymaster, the latter only retaining as his voucher the duplicate certificates. Note.-When Descriptive Roll has been given to a soldier, no FINAL CERTIFICATES should be given until he returns his Descriptive Roll. I certify, on honor, that Hubbard Franklin a private of Captain                    Company (H) of the First Regiment of Lt Artillery Counteers, of the State of Michigan born in Oakland State of Michigan aged 19 years; 5 feet 8 inches high, fair com- plexion blue eyes brown hair, and by occupation a farmer was enrolled or enlisted at Pontiac State of                          by McConnell on the Twelfth day of September 1864, and mustered in service by McConnell at Pontiac State of Mich on the Twelfth day of September 1864, to serve in the regiment for the term of one year; and having served honestly and faithfully with his Company in to the present date, is now entitled to a discharge by reason of * [*State particularly the cause of discharge; if for disability, whether the disability existed prior to the date of muster, or was contracted after it.] SURGEON’S CERTIFICATE OF DISABILITY, Chronic Rheumation producing contraction of the right Sterne cleido mastoid muscle. He has done no duty for three months and isunfit for duty in the Veteran Reserve Corps The said Hubbard Franklin has not been paid was last paid by Paymaster since enrollment to include the Twelfth day of September 1864, and has pay due him from that time to the present date, discharge and he is entitled to pay and subsistence for traveling to place of enrollment, and whatever other allowances are authorized to volunteer soldiers, or militia, so discharged. He has received Thirty three and one third Dollars, advanced bounty. He is entitled to no more Dollars bounty. He has received Clothing from the United States, not paid for, amounting to Thirty one and 38/100 Dollars. He is indebted for other stoppages than above Transportation furnished Twenty-four and 06/100 dollars. He is indebted to                     Sutler,                          /100 Dollars. Given in duplicate, at St. Louis, Mo., this Twenty first day of July 1865, Ben M Patt Ass’t Adj’t Gen., Hd. Qrs. Dep’t of the Mo.