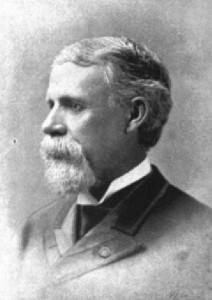 On October 2, 1861, Russell Alexander Alger (b. February 27, 1836 in Lafayette Township, Median County, Ohio) of Detroit, Michigan enlisted in the 2nd Michigan Cavalry at the age of 25. He enlisted as a Captain into Company C and was mustered in that same day. He transferred out of Company C into field and staff on April 2, 1862, when he received a promotion to Major. Alger was captured on July 1 in Boonville, Mississippi and later paroled. October 16, he was promoted to Lieutenant Colonel. He later resigned on October 27 and mustered into the 6th Michigan Cavalry. He was discharged for promotion to Colonel of the 5th Michigan Cavalry on February 28, 1863 and was commissioned in on June 11. He was wounded on July 8 in Boonsboro, Maryland. On June 11, 1864, he was promoted to Brigadier-General by Brevet and on June 11, 1866 he was promoted to Major General by Brevet. He resigned from service on September 20, 1864. Russell Alexander Alger died on January 24, 1907 in Washington, D.C. He is buried in Elmwood Cemetery, Detroit, Michigan. Documents for this Author: