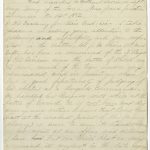 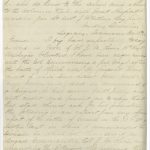 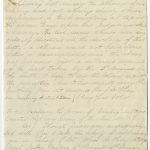 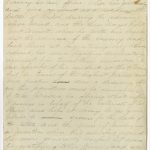 Head Quarters McArthurs Division Left Wing, Army of the Tenn, Near Grand Junction Tennessee Nov 14th 1862 To His Excellency, Gov Blair Mich Sir – I take pleasure in calling your attention to the following and respectfully ask your cooper ation in the matter. Col J. M. Oliver 15th Mich Infty has been in command of the 2d Brigade of this Division since the battle of Shiloh un til now, much of the time under my command and in positions where I had a good opportunity of judging of his abilities as a Brigade commander. He handled his Brigade with skill at the battle of Corinth. He is cool, brave and dis cerning and withal believes that hard blows dealt at the weakest point of the enemy (slavery) is sure to win. He stands alone on his merits as an officer and although I have had but one Mich Regt in my command its conduct in the late engage ment was such that I would wish to com mand more. I there fore respectfully ask that you use your influence to have him appointed a Brigadier General believing he will do honor to the service and a credit to the Wolverine State, with great Respect I remain your obt servt, J McArthur Brig Genl Comding Division Lagrange Tennessee Nov 15th/62 Govenor- I beg have respectfully to say a word in favor of Col. J. M. Oliver, 15th Regt Michigan Volunteers. I have been acquainted with the Col. commencing a few days after the battle of Shiloh, until the present time most of which time he had been under my command, and in command of a Brigade, he has served faithfully and with credit and permit me to say that his state should ask for his promotion. The following is an extract from my official report of the battle of Corinth on the 3rd & 4th of October last in which I commanded the Division in which Col Oliver served as Brigade Commander. Col. J. M. Oliver com manding the 2d Brigade who received the first attack of the enemy (8 miles from Corinth) is entitled to great credit. Charged with one of the most embarrassing duties that could be entrusted to an officer, that of opposing with energy the advance of an enemy and yet retiring slowly when overpowered, a task involving at tax at the same time upon his judgment skill & bravery. The Col seems to have been sin gularly felicitous in the discharge of that duty, a veteran could not have done better or accomplished more the above was preceded with a detailed account of the part taken by the 2d Brigade in the battle. I hope to see the Colonel receive the promotion due to his merits. Very Res pectfully Your Oct Servant         Tho J McKean To his Excellency Austin Blair           Brig Genl Vols To His Excellency The Govenor of Michigan Head Quarters Right Wing Army of the Tenn Nov 15th/62 Sir, Though personlly unacquain ted with you I take the liberty of addressing you in behalf of Col John M Oliver 15th Regt Mich Infty. Comding 2d Brigade 6th Division. I have served with Col Oliver as chief of staff 6th Div from early in april to the 15th of October 1862 and can testify to his charac ter as a gentleman, his efficiency and bravery as an officer, and his gallantry and good conduct as a soldier at the battle of Shiloh, during the advance upon Corinth, and the three days fight ant Corinth, where he with his brigade met the advance of the enemy and held them at bay, retiring only when ordered, his men fighting desperately against five times their number. No one speaks of his conduct at that time but in terms of the highest praise and were justice done a deserving offi cer his promotion would be immediate I take pleasure in offering what influence I passes in behalf of the interests of Col Oliver and hope it may be in your power to secure for the sake of the state and the men of Michigan a position where his services would be more generally useful It would be gratifying to his friends and all good soldiers under his command to see Col Oliver among the appointed earliest selected I have the honor to be very respectfuley your obt servt W L Clark Maj & A A Genl U.S.A