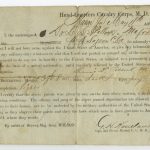 Head-Quarters Cavalry Corps, M. D. M., Macon Ga May 77th 1865. I, the undersigned, Dr. L. L. Pollock a Major Surgeon C.S.A do solemnly swear that I will not bear arms against the United States of American, or give any information, or do any military duty whatsoever, and that I will not permit or counsel any of the men of my command to do any act in hostility to the United States, or inimical to a permanent peace, upon the basis of a united nationality, until regularly relieved by the United States of this obligation.                           Lewis L. Pollock M.D.   Description: Height. 5ft 8in; Hair, dark; Eyes; grey Complexion, light I certify that the above parole was given by me, on the date above written, with the fol- lowing conditions: The officers and men of the above named organization are allowed to re- turn to their homes, not to be molested by the military authorities of the United States so long as they observe their parole and obey the laws which were in force previous to January 1861, where they reside.   By order of Brevet Maj. Gen. Wilson                     C. H. Knuland Capt. and Provost Marshal C. C. M. D. M.