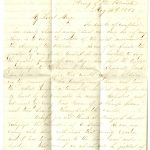 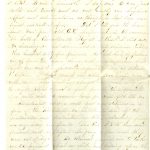 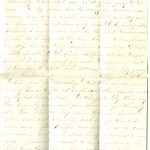 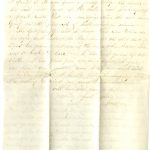 Army of the Potomac May 14th 1863 My Loved Mary, The smoke of conflict has nearly cleared away and one can see = if any there is to see = the results of the latest movement of the Army of the Potomac. As one of its fruits the greatest of our foes. = And I do not hesitate to say the greatest General of our day has paid the tribute of his life to the cause he served. Stonewall Jack= =son is no more for this world, only as he lives in the memory of his Country men Brave and true the “Noblest “Traitor.” of them all.” he died madly devoted= =ly loved by his comrades in arms. Respected and admired by every true lover of nobleness honor. and true bravery. Throughout the world. Perhaps you will think it strange I should eulogize the character of a “Rebel.” He was my enemy while alive with death that enmity ceases. and I love to do honor to the brave and noble dead. What care I on which side he yielded up so valuable a life. Would it have added an addition= =al lustre to his bright and glorious example to have it said “He was a Unionist.” I say no; he was just noble and true and as well worthy our highest respect and admiration as though he had been our friend instead of foe. Did I tell you the brave part “our” good old C. “C.” performed in the memora= =ble battle of Chancellorville May 3rd I think I did not. On Saturday wee had skirmished a long distance taking three hundred sixty five prisoners. But had been by Jackson cut off from the main Army and no alternative but fight our way through vastly superior forces, or submit to capture. I think nearly our whole Corps was with us. Three brilliant charges were made during the night which cleared a path probably three fourths of a mile wide. A narrow lane for wide folk like us, We retreated about a mile and were stationed in a piece of the “Wilderness.” On the north side of the Gordonsville and Fredricksburg Pike, musketry firing was very heavy in front. Two Cos “P” & “B” were sent forward and deployed. In going a few rods they were out of sight. We obtained permission to take our Co forward which we did. And coming upon the line of the other Co. which had proceeded us but few of the men could be found of said Co. We could see nothing of any troops except oc= =casionally a wounded man or straggler going to the rear. We lay down. Soon the strugglers became nu= merous some by our orders would halt and stay with us. forming in all some sixty men. (C. Co. had forty eight.) Suddenly a few of our men on the right commenced firing. As I supposed they were some of “Hookers.” I made them stop, but some thing suspicious caused me to look a little farther to the front. Stepping not over ten feet forward I saw a line of “Grey Backs” comprising not less than one thousand and not more than fifty yards off. Another instant and my brave boys were at them the Rebs. Fired but one volley with those terrible death dealing Sharps Rifles we thined their ranks and ere they had time to reload We Charged. They threw away their arms by scores and gave themselves up. Directly where their line was lay more than one hundred of their dead and wounded. Such savage work I never saw. Gen Whipple was with us at the com= =mencement and ere he died being afterward woun= ded. Declared we saved a large portion of the Third Army Corps from being entirely cut off. But were I with you I could tell a much prettier story. O that I were. Yesterday a letter came for one of our dead heroes I opened it. It was from a young lady his love. She had just heard of the battle and picking up a pencil wrote that in imagination she saw him lying in the pile of noble martyrs slain. She felt deeply and I know there were tears in her eyes and sadness in her heart. She did not sign her name but one of the men who knew her sent it back to her. I received yours of the sixth. I am glad you are so hopeful it give me more confidence. And I do my work with a lighter heart. I hardly feel like staying here I’ve nothing to bind me since Brewers death. With love and many a kiss Good night. Gardner