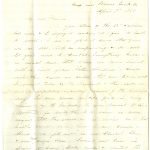 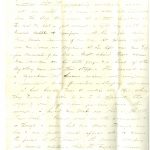 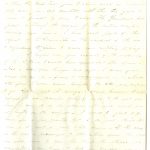 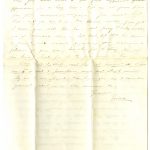 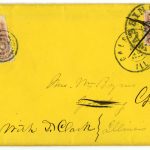 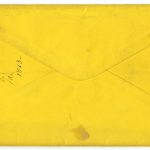 Camp near Potomac Creek, Va. April 7th, 1863 My Dear Florence, Your letter of the 28th came last night & I enjoyed reading it far too much to write. I am so glad to know that you are so well. Keep on improving & do not let your mind be troubled. Everything here is as usual. Save that today we were honored with a visit from “Father Abraham”. Last night there came an order that our Corps would be reviewed today by the President & this A.M. we were congratulating ourselves because of the beautiful day. For some reason we take pride in being reviewed by the President. We were bound to disappointment for early this A.M. came an order saying that there would be no review by that Lincoln would ride through our camps. About 11 we “fell out” in our bluest blues & our most brazen brass. Formed on a line in front of camp; broke ranks & waited the arrival of our great military & civil head. Soon after 12 we heard him coming & we formed in open order. Our camp is so situated that the approaching cavalcade could not see until very near – a little hill intervene. Down the slope they came at a trot, right side, Gen. Meade, Commander of our Corps. At Meade’s right, was Gen. Barnes, our Brigadier. At his left, was Gen. Griffin, Commander of our Division. Next behind them came Gen. Hooker on his little gray & a host of other Majors and Brigadier Generals with their staff. The escort was a squadron of Lancers whose neat uniforms & pronounced lances presented a stricking appearance. I had hardly time to notice all this when they turned a little so as to be opposite the right of our regiment before passing down the front. I heard Gen. Meada say, “This is the old first Mich.” “Present arms” was the command & as though a wire had been drawn through our line & one pull would affect all so came the pieces to “present” – the colors grouping all swords saluting while the bugles & drums beat a “march”. Abraham bowed low & “came up” with his hat in his left hand. When he had past the colors, the pieces were brought to a “shoulder” & then the Mich. first gave 3 cheers such as Wolverines only can give. Not content with this, they gave three more & finished by giving 3 cheers. The President looks faded, as though the affairs of the nation weighed heavy upon him. I have read part of the report of the Committee on the Conduct of the war & regarding McClellan I have now nothing to say. I laughed over your account of the sufferings of D. I think I could have appreciated the affair. Had a letter from Warren came tonight. He tells me unless I get better fast to resign & come home. I am afraid I am becoming entirely well, & do not see how I can do as he advises. He will write me at length on the subject. I would be glad to go home for a free months, but I do not think this war is to last a great while longer. If the army in the West is successful & Charleston falls the rebellion will soon be over. We think the attack on Charleston has begun & look for brighter news from the West. We will not move until we can go after starting. We have all confidence in Hooker. You will write me often now that you are stronger. When your letters come, I am quite different in appearance for a long time. Tell me all your plans for your “summer’s campaign”. You must visit Mich – if you dare do so. Has Melia written you yet? I know you will like her. And Jenny P. & Mrs. Doolittle are at Hillsdale now. Tell Mich C. B. that his opinions & yours & mine coincide regarding you becoming a follower of grim war. But what put the strange idea into his brain! Thanks for all the good wishes & love. Don’t think I shall need “Ned” at present as I am now sixth in rank and promotions move but slowly. My love to our friends. Kiss Lizzie & consider yourself used in a like manner. Yours, Will