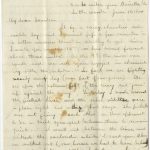 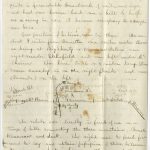 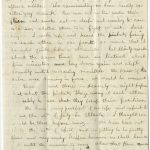 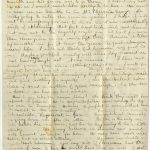 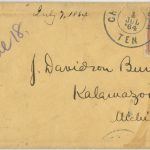 8 or 10 miles from Marietta Ga In the woods June 18, 1864 My dear Davidson It is a rainy, cheerless, mis- erable day and I cannot pass a few minutes in a better manner than in writing to you. Since I wrote you on the 12th we have moved forward about three miles. On the 15th the move was made and we were again engaged in skirmish- ing with the rebels.      In fact we are fighting nearly every day (some part of our forces). We are upon the extreme left of the army and “jam” up against the enemy. Yesterday I rode around the picket lines and the rebel [   ?   ] were in plain sight and within good range. The pickets were not firing on each other as there appeared to be a tacit agreement between them to remain quiet.  I went out between the lines and picked the enclosed which I sen you. When we walked out (our horses we had to leave behind) the rebel pickets moved their hats to us.   During the night of the 15th we “slept on our arms” (See a late number of Harper’s Weekly) We had one advantage over the men there represented as we had thrown up quite a formidable breastwork of rails and logs and had our horses back over a hill to help us a away in case it became necessary to change our base. Our position, I believe now is thus.           We are about 8 miles from Marietta our centre under Thom- as being at Big Shanty or Kennesaw Station. our right is under Schofield, and our left under Mc Pherson. The line is 6 or 8 miles long. Stone mans cavalry is on the right flank and ours (Garrards) on the left. [Hand-drawn Map] The rebels are directly in front of us on a range of hills connecting the three mountains. Brush Kennesaw and Lost. The right was to push for- ward to-day and obtain possession of those between Kennesaw and Lost. I presume they are at it now as we have been hearing heavy cannonading all the morning. It is too far off to hear the musketry It is strange what little impression firing makes on one after a while. The cannonading we hear hardly ex- cites any remark. Our men sit or lie under their flies and awake eat or sleep not seeming to care a straw whether there is a fight or not. Last night I woke up and heard the pickets firing on each other in our front so much that it wounded quite like a skirmish. Col Minty awoke about the same time and we listened about five minutes and lay down again and slept soundly until morning reveillee. We knew if the rebs were coming in force. We would be warned in time, and there is scarcely a night passes but what the pickets blaze away at each other probably to see that they keep their positions. We have every prospect of success and expect to spend the 4th of July in Atlanta. I thought we would be there before now.             We have been out since the 30th of April, and are getting to be pretty tired and very seedy. I suppose however we shall have no rest until the summer is over. When that time comes I hope the rebellion will be partly effectually smashed. I was very much in hopes of seeing Willy here this sea- son. Genl Smith was ordered here but since Stugges has been whipped by Forrest near Memphis rumor says that Smith and his forces are to go there. I hope it may not be so, as I would much like Willy to be here. He would be near us as Smith is in McPherson’s Army. Is Willy going to enter the service again? I hope it will not be necessary for me to do so, as I am most heartily sick of soldiering. Wet feet, hard tack, dirt and discom- fort are not to be eagerly sought for, at least for more than three years in one man’s life time. Besides it total- ly unsettles one for at least ten years in fact changes one’s life. I will not think of it however, my foot is in. Maybe a grateful country will some day reward is and (more likely) maybe not. Nous verrous.  I have not heard from you since (I think) May 12th. I wrote you May 11th, 20th, 30th June 12th & 14th. We get the main semi-oc- casionally. It is rather discouraging to see a ten days mail opened and find nothing for myself.          In the Detroit Adver- tiser I read a notice of your marriage. So the deed is done. You have my best wishes. How do you like the nominations? We think they might have inproved on Johnson. He is very unpopular, even among the Un- ion men in Tennessee. However “A prophet is never without hon- or, except in his own country”       Fremont has commit- ted suicide. “Requiescat in pace” Our political Generals are going down one after the other. Butler is the only one who holds his own now and he is beginning to be a little shaky.             The army believes in Lincoln and would vote almost “en masse” for him. He may have made mis- takes but so would others.               We have our doubts a- bout Genl Sherman and say that if Rosecrans yet. I am for any man who will win.        Do write me soon, I sup- pose you have ere this. Love to yourself & Madge Your affecly R.B. We captured (robbed) a mail the other day in which was the enclosed letter. Did you in your courting days write such [On Envelope:] July 7, 1864 June 18 J. Davidson Burns, Esq Kalamazoo Michigan