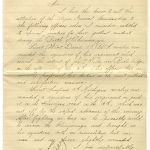 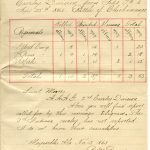 Murfreesboro, Tennessee 26th December 1863 Major Sinclair A. A. Genl. Sir: I have the honor to call the attention of the Major General Commanding to the following officers whom I consider entitled to special mention for their gallant conduct during the Battle of Chicamauga. Lieut. Wirt Davis, 4th U.S. cavalry com- manded the squadron of his regiment which covered the retreat of the 7th Pa. over Reed’s bridge on the afternoon of the 18th. This officer has in- variably performed his duties in the most gallant and satisfactory manner. Lieut. Simpson. 4th Michigan cavalry, com- manded a squadron of his regiment, on pick- et on the Harrison road on the 18th, which was cut off by the rapid advance of the enemy. After fighting as long as he possibly could he swam the Chicamauga and brought in his squadron with no casualities but one man and one horse slightly wounded. I am respectfully, Your obedient servant R. H. G. Minty. Col. Comdg. [ ? ] Robert Burns (late) Capt & AAAG Report of Killed Wounded and Missing in 1st Brigade, 2nd Cavalry Division from Sept. 17th to Sept 25th 1863. Battle of Chickamauga Lieut Moore. A. A. A. G. 2nd Cavalry Division Above you will find report called for by this mornings telegram. The 3rd Indiana cavalry has not reported. I do not know their casualities. Maysville, Ala. Nov. 12 1863 Robt Burns Capt & A.A.A.G. [ ? ] Robert Burns (late) Capt & AAAG