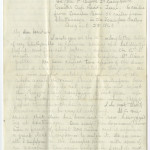 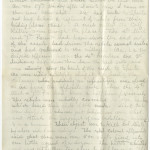 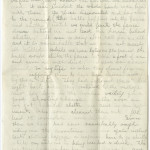 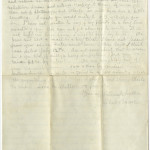 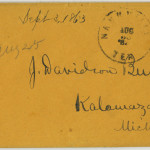 Hd Qurs 1st Brigade 2d Cav’y Div Smith’s Coss Roads Tenn. 6 miles from Tennessee River. 38 miles from Chattanooga in the Tennessee Valley August 25, 1863 My dear Davidson I wrote you on the 14th a long letter telling of my Shelbyville experience sending also Col Mintys report and five rebel papers. again on the 16th I wrote on the eve of our departure from McMinn- ville. We have crossed two spurs of the Cum- berland Mountains and alighted in this place we are now engaged watching the movements of the rebels a cross the river about 6 miles from here seeing that they do not run a cross and repeat the Bragg + Buell campaign of last year up in Kentucky. This is the place where Braff passed through with his army. I do not think Rosecraus will be caught napping. It is ru- mored that there has been and is now heavy fight- ing at Chattanooga. Our army (Gen Rosecraus’) now has a front of about 200 miles and it requires a great deal of vigilance to watch it. We are now all I suppose on the Tennessee River with some of us a cross. Our main body is in front of and around Chattanooga. I know nothing certain about his of course. We are on the extreme left. and are in East Tennessee. We shall pro- bably stay here but a very short time. We have had several skirmishes and chases within the last week. On the 17th the day after I wrote you I came ra- ther near being shot. We had been to Sparta and had driven a regiment of rebels from their hiding places there. A creek called the calf killer runs through the place. The 4th Mich and 7th Penna had been down the east side of the creek had driven the rebels several miles and had returned to the village. We, i.e. the Brigade officers with the 4th Regulars and 3d Indiana had driven them down the west side and were returning along the bank of the creek to Sparta We were riding carelessly along at the head of the column when suddenly an inferval fire was opened on us from the opposite side where the 4th Mich + 7th Pa had been a half hour previously The rebels were wholly concealed in the bushes which lined their side of the creek. Lieut Vale our Inspector who was just behind me was shot. and Buch the Sergeant of our Ordelier besides 3 or 4 horses. Their object was to kill Col Minty by whose side I was riding. The rebel colonel afterwards said that there were over 500 shots fired into our little squad of a dozen. The bullets whistled and sang altogether too close to be pleasant. The creek could not be crossed there. There were no bushes between us and the rebels and a high fence was on the other side of the road We first attempted to run the gautlet but formed the fire was getting hotter the farther we advanced, and it was evident the whole bank was lined with them. We then dismounted and lay close to the ground (the balls popping into the fence and earth) until we could push the fence down behind us and lead our horses behind shelter. It was a very close call for us all and it is remarkable that we were not nearly all killed. While we were lying on the ground the balls would strike the fence within a foot of us and cover us with dust. I never was o sur- prised in my life as when they opened fire on us supposing them to have been driven away by the 4th Mich. They had followed the 4th Mich right back when they returned to the village and lay down in the bushes waiting for a good shooting chance. As soon as we got behind shelter we sent in our reg- iments who soon cleaned them out. We had 15 wounded none killed.     Since then we have had some remarkably rough riding over the mountains. We are again without tents, clothing, baggage or wagons. have to go shirtless while our only one is being washed + dried. The weather however has been very pleasant and warm and we are now accustomed to sleep shelterless on the ground. I keep my health very well. Am perfectly sound and tough and think unless some accident happens I shall see this war through and return as well as ever. We think we have the rebellion down and intend keeping it there. If we can get them out of Chattanooga and Atlanta we will have done a little something. I wish you would write to N.Y. + Willie for me. I have not written to any of my friends in a long time excepting you. We can not get chance to write. It is not half an hour since I alighted from my horse. We have not had a mail in a long time. I have not heard from you since Porter went home. Your last I think was dated July 12th. Am not sure about that however In it you told if Willy’s being inspector. Did you re- ceive $250 by Porter? We are completely cut off from the world here. Now + then by carriers heard Northern doings. a party is going in a few minutes a cross the mountains and by them I shall send this. Write to me. Love to Mother + friends Your affectionate brother Robert Burns [On Envelope:] J. Davidson Burns Esq Kalamazoo Michigan