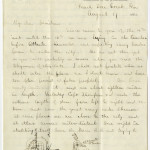 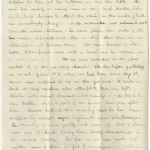 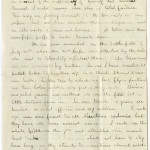 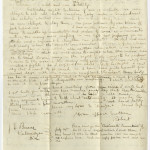 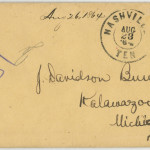 Head-Quarters 1st Brigade, 2nd Cavalry Division, Department of the Cumberland, Peach Tree Creek, GA August 17 1864. My dear Davidson Since mine to you of the 4th inst until the 15th we were laying in the trenches before Atlanta dismounted and expecting every twelve hour to enter the city. We are not there yet as you will probably be aware when you read the telegrams of this late. I shall not foretell when we shall enter the place as I don’t know, and have too often burned a false prophet.            Our lines nearly [ ? ] it, and are about eighteen miles in length. Yesterday Capt Thompson + I rode the extreme length of them from left to right and re- turn. and saw the great army under Sherman at some places we are close to the city. and at others several miles distant. Our right is stretching itself down the Macon R.R. and trying to [see document for hand drawn map] reach it and effectually cut Hood off. Hood very obstinately stretches his line out too between us and R.R. He now has nearly as many men as we and neither ride particularly desires to attack the other, as the works of both are exceedingly strong. Forts, earthworks and entrenchments cover the whole distance. In some places the works of the two armies approach each other so close that there are no skirmishers out between them. The men [   ?   ] in their holes like fixer and not a head can be shown that is not shot at. We are now encamped at the place marked 2 on the preceding scrawl: the day before yesterday we moved June No 1 where we had been since Aug 1st. We are now supposed to be on the “qui vive” to make a dash at any raiders who attempt to turn our left. Wheeler with several thousand rebel cavalry is reported to be near Dalton and a part of our forces have gone after lives. Rumor hath it this morning that he has been whipped by several negro regiments from Chattanooga Our cavalry is now pretty well used up that if Stone- man and McCook having been hadly demoralized in the recent raids. As for as we can make out neither man of them is fit to command a platoon. McCook allowed his men to get drunk in the wines + they had captured from the rebel officers and a great many were made prisoners. The raid of Stoneman, on account of the inefficiency of himself and another General I could name, was also a total failure. You may see glowing accounts of the two raids in our papers but we here consider them a disgrace and an idle waste of men and horses. It takes more than newspaper puffs to make Generals here. We are now encamped on the battle field of July 20th where the 20th Corps was attacked by the reb- els and so bloodily repulsed them. The trees around us are scarred by balls. In one I have counted 61 bullet holes, in another 47. in a third 23 and 2 can- non balls. In the tree to which one tent fly is fastened are ten holes within six feet of the ground. Union and rebel graves are scattered all over the field but a little distance from us. In one trench or grave are burried 4 rebel officers and 49 soldiers. A week ago men were found in all directions unburied but they have all been covered since. I rode over the whole field on the 7th and stumbled over several dead “rebs”        I hope we shall not have to stay here long as the stench is sometimes almost intol- eralbe. Dead horses and mules still lie about entirely too near.             The whole of this country is one great Golgotha. Yesterday in our ride we were not five minutes without the most intolerable smells com- ing between the wind and our volulity. Saturday night between 9 and 12 o’clock we were obliged to sit and make ourselves easy under a bombardment. The rebels shelled our camp for about three burn and we were obliged to stay there. One poor fellow’s lef was blown off just behind me.                I had written thus far when orders came “to saddle up immediately and prepare to move at a moment’s notice; the enemy were massing on our left and preparing for an attack send a regiment to strengthen our pickets” We did and were just ready when the “recall” was rounded. It was a false alarm We dismounted + unsaddled when another order which is in force was rec’d and now says that we will move to-night when the moon ris- es to Sand Town away on the right of the army” to be prepared to move to the rear of the enemy and force time to come out of his works + fight. so I suppose we shall start to-night I can’t say that I want to go much as I have been quite unwell for several days with the common complaint “diarrhea” Every body here has it semi-occassionally and it is not consistence a cause for going on the sick list. It is disagreeable and weakening. I shall probably be over it in a few days. I have heard nothing from you since I wrote last. I yet look for Willy. We have rumors every day that Genl Smith’s command is on the way here. I do hope it will come. Our regiment begins to talk about “neterauizing” it may be in Michigan in a few months.           Have not heard lately from Greens. Give my love to “Madge” Good bye God bless you all. Your affect brother Robert J.D. Burns            Please send for the “Cincinnatti Commercial” of Kalamazoo          July 14th In it is a report which I sent them. I Mich                      have heard it was in that number, but we can get no copies here. Keep one copy for me and send me one [On Envelope:] J. Davidson Burns Esq Kalamazoo Michigan