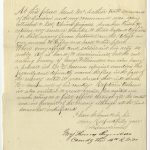 At this place Genl McArthur took command of the Division and my command was again attached to Col Olivers Brigade. And here I wish to return my sincere thanks to these Gallant Officers for their many favors bestowed on the 16 Regt on our march to Ripley and back to this place. Where every officer and soldier did his duty so nobly it is hard to discriminate, but the cool daring bravery of George Williamson our color bearer a private in Co “E” deserves especial mention. He proudly and defiantly waved the flag in the face of the enemy until it was almost shot into shreds. “He deserves well of his country” Captain Osborne is also entitled to great credit. He assisted me much, acting as a field officer through all the contest and in pursuit of the enemy although all the time some what indisposed I have the honor to be, Sir very Respectfully your obedient servant, Maj Thomas Reynolds Comdg the 16th R. Is. V