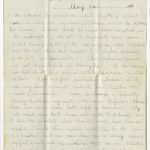 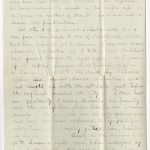 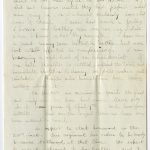 2 Head-Quarters Second Brigade, Second Division Cavalry, May 20186 We intended to picket the whole length of Flint River. so that the [ ? ] gentleman would be between two liner. I don’t think he could have escaped us. At midnight of the 11th a despatch came from Lt Col Andress of the 7th Pa informing us that Pritchard and the 4th Mich had caught J. D. on the morning of the 10th at Irwinville. This carrier found us at Gum Creek in Dooley Co. At the news we did shout, and perform saltatory exercises “en dich- abille” I, for one felt particularly pleased, as it was my own regiment which had nabbed the erratic individual. There is always a friendly rivalry between regiments of the same Brigade & Divis- ion, and each man bets high on his own. My only regret was that I was not with Pritchard. Had I had the slightest idea that he would have been suc- cessful I would have ridden with him to the end of Florida, but we have been on so many unsuc- cessful scouts and excrusions, that no one thinks of volunteering for such a ride. When Pritchard and the others started out they did not in the least suppose they would be successfully. You undoubt- edly have read the full account of his captures his vain endeavor to escape in his wife’s dress as the “poor old mother” of Mrs. D. so I will not re- hearse the particulars. At 5 30 A.M. on the 12th I started with 3 or 4 men from Gum Creek to see if I could not catch Pritchard before he got to Macon. I reached Haw- kinsville, 36 miles, at 2 P.M. and Pritchard had passed through the night before, so I gave up all hopes, however I determined to go on to Macon. At 5 30 the next day I started again and reached Macon 44 miles at 2 30 and caught up with the 4th Mich just before the regiment reached the city. I there had an opportunity of seeing Mr. Davis, his family, and the reception given him by his former friends. No one gave him an encouraging word and but one man appeared to sympathize with him. I really pitied him, traitor as he is. Early in the morning of the 12th I saw a sight never before witnessed by me at the South now anywhere else. I saw a negro chered by bloodhounds and men. I of course did not see the negro but the [ ? ] went on the run by us on his tracks. I did not know until they had passed what was going on or I should certainly have shot some of them. I never had such a feeling of honor and loathing come over me as I did when I knew what they were after. I have seen a great many men killed in battle but was not atall affected in comparison I am becoming a good deal of an abolitionist. If our late troubles is settled without the total and immediate abolition of slavery, we will make a great mistake. People who haven’t been here, knows nothing about it. On the 14th we received a mail the first and only one we have had since March 21st In it were yours of April 9th and two from Detroit. That was the longest time we have ever been without a mail. We expect to start homeward on the 22nd inst. Our regiment has orders to be ready to move Northward at that time. We expect to march through to Nashville. and it will probably six weeks or two months.