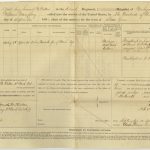 Muster-In Roll of Assit Surg. Samuel M. Holton in the Second Regiment, (…………………Brigade,) of Michigan Infty Volunteers, commanded by Colonel William Humphrey  called into the service of the United States, by The President of U.S. from the thirteenth day of September 1864, (date of this muster,) for the term of Three years unless sooner discharged.   (A.G.O.No. 21-First.)                                                  Directions *1st. All officers mustering troops into the service of the U.S. will take special care to see that opposite every name, whether officer of Soldier, are entered the State and the No. of the Enrollment District in which he was enrolled under the act of Congress, approved March 3, 1863, (known as the Enrollment Act,) by the Enrolling Officers of the United States. 2d. The Mustering Officer will see that four copies of this Roll are made, three of which he will retain; the fourth will be retained by the Company Commander, or, in case of Field and Staff, and officers and men mustered into service separately or in squads, bu the Senior Officer, Non-commissioned, or the Private standing first on the list of persons so mustered in, to be handed by him to the person who musters them or him at his next muster, that the new Muster Rolls may be properly made out. The Mustering Officer will dispose of the three copies retained by him as follows: He will send one to the Adjutant General of the Army, one to the Paymaster General of the Army, and one to the Adjutant General of the State to which the troops belong. These will be sent as soon as possible after the muster-in.