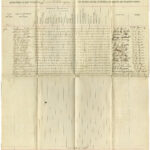 No. 52. We, the undersigned, Non-Commissioned Officers, Artificers, Musicians, and Privates of Co. F. 2nd Mich, Cav. do hereby acknowledge to have received of Lieut M. H. Creager the several articles of Clothing set opposite our respective names:     Note.-Erasures and alterations of entries are prohibited. Regular and extra issues will be distinguished on the receipt roll. Each signature, whether written by the soldier or acknowledge by mark, must be witnessed. Vacant space will be filled by a cypher. Mounted men may receive one pair of “boots” and two pairs of “bootees,” instead of four pairs of bootees. As the metallic shoulder scales, letters, numbers, castles, and shells and flames will last for many years, they will be borned on the returns as company property, in the same manner as are sashes, knapsacks and straps, haversacks, canteens and straps, and other articles of camp and garrison equipage, and will be charged to the soldier only when lost or destroyed through neglect.