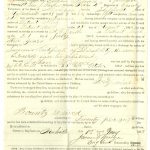 CERTIFICATE To be given to Volunteers at the time of their Discharge to enable them to Receive their Pay, &c. I certify, on honor, that Lathan Bunce a private of Captain Lt. Thos. J. Parker’s Company (“A”) of the 4th Regiment of Cavalry Volunteers, of the State of Michigan, born in Sheffield, State of Massachusetts, aged 39 years; 5 feet 8 ½ inches high: light complexion, brown eyes, red hair, and by occupation a Farmer, having joined the company on its original organi- zation at Detroit Mich. and enrolled in it at the muster into service of the United States at Detroit Mich. on the 28 day of August, 1862 (or was mustered in service as a recruit by A. G. Wells, at Detroit Mich. on the 21 day of July 1862, to serve in the Regiment) for the term of three years: and having served honestly and faithfully with his Company in                    , to the present date, is now entitled to a discharge by reason of Surgeon’s Certificate of Disability, the same was contracted since his enlistment. The said Lathan Bunce was last paid by Paymaster, Maj. C. M. Terrill to include the 31 day of October 1862, and has pay due him from that time to the present date, and also pay for the use of his horse, (having been mounted during the time) and he is entitled to pay and subsistence for traveling to place of enrolment and whatever other allowances and au- thorized to Volunteer soldiers, or militia, so discharged. He has received Forty-nine 87/100 dollars advanced by the United States on account of Clothing. There is to be stopped from him, on account of the State of , or other authorities, for clothing, &c., received on entering the service,                    /100 dollars; also, for expenses of subsistence for traveling from place of enrolment to the place of rendezvous, amounting to /100 dollars; and on account of the United States for extra clothing received in kind from and for other stoppages, viz: Bounty received amounting to Twenty-five ($25.) 00/100 dollars; and he has been subsisted for traveling to his place of enrolment, up to the 186 He is indebted to                     , Sutler,                       /100 dollars. Given in Duplicate, at Nashville this 1st day of May 1863 James D. Morgan Brig Genl Commanding Post NOTE.-Two of these Certificates, (or duplicates) are to be given to each volunteer soldier who may be discharged previously to the discharge of his company, that he may at once receive from the Paymaster the pay, &c., due him, and the captain or other officer commanding the company will certify to the act of the delivery of the duplicate certificates: on these certificates the soldier is “entitled to” his discharge, and should also present his discharge to the Paymaster to have the payment endorsed on it. The discharge is to be given back to the soldier by the Paymaster; – the latter only retaining as his Voucher the duplicate certificates.