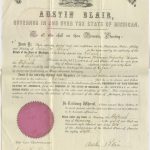 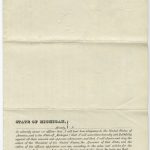 State of Michigan, County, I do solemnly swear (or affirm) that I will bear true allegiance to the United States of America, and to the State of Michigan; that I will serve them honestly and faithfully against all their enemies and opposes whatsoever, and that I will observe and obey the orders of the President of the United States, the Governor of this State, and the orders of the officers appointed over me, according to the rules and articles for the government of the armies of the United States and of this State, So help me God. Sworn and Subscribed before me,           this day of                A.D. 186… State of Michigan Austin Blair, Governor in and Over the State of Michigan. To all who shall see these Presents, Greeting: Know Ye, That, reposing special trust and confidence in the Patriotism, Valor, Ability and Fidelity of John M. Oliver in the name and by the authority of the People of the State of Michigan, I do hereby appoint him Colonel Fifteenth Regiment, Michigan Infantry Brigade, Division, in the Militia of said State; to rank as such from the Fifteenth day of January eighteen hundred and sixty two He is therefore carefully and diligently to discharge the duties of Colonel by doing and performing all things thereunto belonging. And I do strictly charge and Require all Officers and Soldiers under his command to be obedient to his orders as Colonel. And he is to observe and follow such orders and directions, from time to time, as he shall receive from the President of the United States of America, from the Governor of the State of Michigan, as the General or other Superior Officers set over him, according to the rules and discipline of War. This commission to continue in force during the pleasure of the Governor of the State of Michigan, for the time being. In Testimony Whereof, I have caused these Letters to be made patent, and the Great Seal of the State to be hereunto affixed [State Seal] Given under my hand, at Lansing, this Fifteenth day of January in the year of our Lord one Thousand eight hundred and sixty two and of the Independence of the United States of America the eighty sixth. By the Governor:          Austin Blair Geo H Hinse Dep Secretary of State. Jno. Robertson Adjutant General.