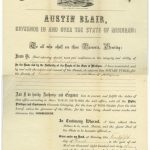 STATE OF MICHIGAN. AUSTIN BLAIR GOVERNOR IN AND OVER THE STATE OF MICHIGAN: To all who shall see these Presents, Greeting: Know ye, that reposing special trust and confidence in the integrity and ability of Lyman G. Buckingham In the Name and by the Authority of the People of the State of Michigan, I have nominated, and by and with the advice and consent of the Senate, do appoint him NOTARY PUBLIC, for the County of Genesee in said State of Michigan And I do hereby Authorize and Empower him to execute and fulfill the duties of that office according to Law: TO HAVE AND TO HOLD the said office, with all the Rights, Privileges and Emoluments thereunto belonging, for the term of FOUR YEARS from the date hereof, unless the Governor of the State, for the time being, should sooner revoke and determine this COMMISSION. In Testimony Whereof, I have caused these Letters to be made Patent, and the Great Seal of the State to be hereunto affixed. Given under my Hand, at Lansing, this Twenty fifth day of March, in the year of our Lord one thousand eight hundred and sixty three, and of the Independence of the United States of America, the eighty seventh BY THE GOVERNOR:                                 Austin Blair J. B. Porter Secretary of State.