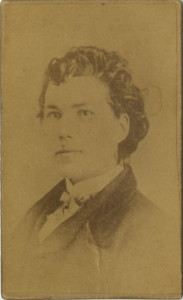 Sarah Emma Edmonds was from Genesee County, Michigan and was 20 years old when she enlisted in the 2nd Michigan Infantry Company F as Franklin Thompson on May 17, 1861 in Flint, Michigan. On May 25, she was mustered into service and was later discharged on April 19, 1863 by Edwin Stanton, Secretary of War. She was the only woman who was granted membership into the Grand Army of the Republic (GAR). In 1865, Edmonds published her memoir entitled “Nurse and Spy in the Union Army: Comprising the Adventures and Experiences of a Woman in Hospitals, Camps, and Battle-Fields”. On September 5, 1898, Sarah Emma Edmonds died in Laport, Texas. Documents for this Author: