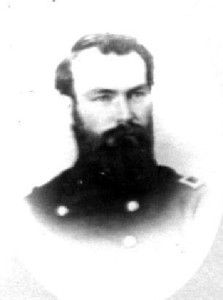 Benjamin D. Pritchard was born on January 29, 1835 in Nelson, Portage County, Ohio. He was living in Allegan, Michigan when he enlisted as a Captain in the 4th Michigan Cavalry Company L on July 25, 1862. He was mustered into service on August 29 at the age of 27. Pritchard was promoted to Lieutenant Colonel on November 26, 1864 and then to Brigadier General by Brevet on March 10, 1865. He was transferred from Company L to Field and Staff on January 17. On May 13, Pritchard was given charge of Jefferson Davis, his wife Varina Howell, and other prisoners as he escorted them to Fort Monroe in Virginia. Benjamin D. Pritchard was discharged on July 1 at Nashville, Tennessee. He died on November 26, 1907 in Allegan, Michigan. Documents for this Author: